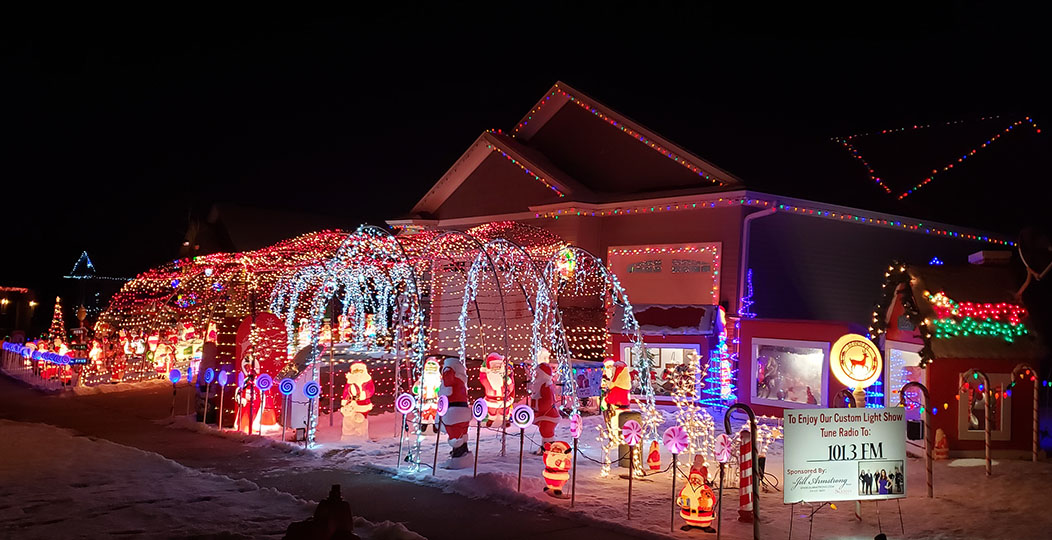 Every year after Thanksgiving, my husband and I enjoy exploring the outdoor Christmas lights in the area around Iowa City, Iowa. If you’re planning to visit friends or family in the area, maybe you’ll enjoy taking a drive to enjoy these for yourself.

There are 3 houses in particular in North Liberty that we enjoy driving past at Christmas time.  One of them is widely known in the area as “the Santa House” because its yard displays over 100 lighted Santas. We have named the other two “the Holiday House” (because its owners decorate not only for Christmas, but also for Halloween) and “the House on Colton” because that’s the street it’s on.

Tune your car radio to 101.3 FM to listen to mood music as you drive by.

I’m so impressed by the hard work that Josh Covert and his family do to make their yard a delight to visit.  There used to be a “Santa House” on Valley View Drive in Coralville that set up these displays every year for 25 years. When that homeowner decided to stop doing it, the family in North Liberty purchased the decorations and kept the tradition going, with 2017 as his first year doing it.  I have enjoyed driving past every year since then.

Unfortunately, the first year the North Liberty family set up the decorations, the Grinches in the city government notified them that they were going to penalize them $835 ($750 fine plus court fees) for placing their private property on the city’s public right of way. This was because the arches had been set up to create a magical walkway over the sidewalk. In order to avoid the fine, the family was required to remove the arches and the items between the sidewalk and the street, though they were allowed to keep the rest of the decorations on the part of their yard behind the sidewalk. The City of North Liberty Grinches gave them only 2 days to make these changes.  The following year, the arches were erected in a different part of the yard.

I’ve noticed that each year the decorations are arranged a bit differently from the year before.  It’s fun to see how different the yard has looked from one year to the next.

In 2018, driving around North Liberty looking for holiday lights, we discovered “the Holiday House” by accident.  It’s amazing to think how much work went into this, and how many hours up on ladders to install all those roof decorations!

Originally, we called it the “North Liberty Christmas House” when referring to it, because of the amazing Christmas decorations it featured when we discovered it in December 2018.  But then, my husband bicycled past it in October 2019, and discovered that the residents of this house appreciate more than one holiday! Here is what it looked like by day:

And here is what it looked like by night just before Halloween 2019:

The House On Colton

In December 2019, as my husband and I were driving around North Liberty looking for Christmas lights, we discovered another new-to-us elaborately decorated house.  We might be wrong about the address, but we think it’s 25 Colton Drive South.

This house is on 12th Avenue in Iowa, immediately south of the bridge where 12th Avenue passes over Interstate 80. We believe its address is 1103 12th Avenue, but we could be wrong about that.

My husband and I refer to this as “the Christmas Massacre House” when we’re talking about where to go on our Christmas light viewing expeditions. It may seem like a strange name for a festive holiday environment, but we actually have a good reason for calling it that! The first time my husband drove past it was during the daytime, and he noticed that the many inflatable yard ornaments were deflated, lying in a heap of vinyl.  He thought it looked as though someone had massacred all them all.

As you can see in this photo, though, the ornaments were all alive and well when we drove by that evening!

In Iowa City, there is a street called Rita Lyn Court near the intersection of Rochester Street and First Avenue. This is the best place I have found to look at Christmas lights in Iowa City because there are so many brightly-decorated yards close together on a very short street. This makes a spectacular walk on a mild evening.