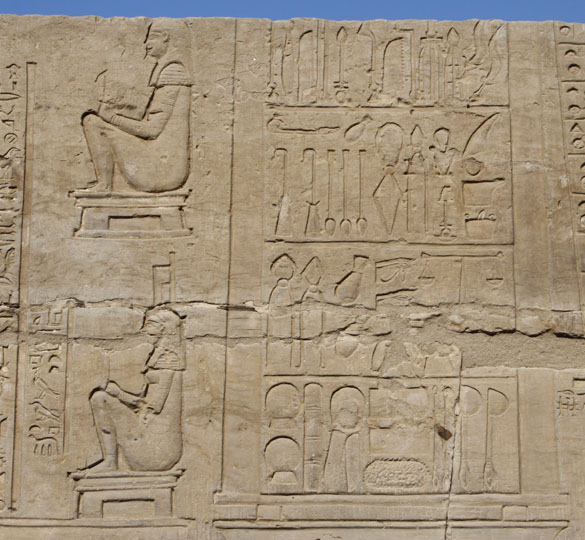 Temples and tombs from ancient Egypt offer many tributes to motherhood.  As of 2019, I’ve found one tomb at Saqqara with a madonna scene, and several temples along the Nile cruise route with motherhood-related images, including Luxor Temple, Edfu Temple, Kom Ombo Temple, and Philae Temple.  Here’s a look at the ones I’ve discovered in my travels so far.

Tomb of Niankhkhnum and Khnumhotep (Tomb of the Brothers)

At Saqqara, which is just outside of Cairo, the tomb of Niankhkhnum and Khnumhotep, often known as the “tomb of the hairdressers” or the “tomb of the brothers” features two beautiful scenes of motherhood near its entrance.

These are the oldest images from ancient Egypt that I have found so far celebrating motherhood. Although scholars have not determined the tomb’s exact age, the current theory is that Niankhkhnum and Khnumhotep served either Nyuserre Ini or Menkauhor Kaiu.  Assuming that theory is correct, this tomb would thus have been built in the latter part of the 25th century BCE, making it over 4,000 years old.

One of the images at this tomb shows a small child playing around his mother while she does her daily housework.

The other shows the mother nursing the baby when it’s time to feed him. It’s really interesting to see this madonna-type image that was created about 2,500 years before the time of Christ.

The birth room of the Luxor Temple tells how Queen Mutemwia became the mother of Amenhotep III. It offers a fascinating story of immaculate conception, annunciation, and birth about 1,300 years before the story of Jesus Christ. The bottom row shows the ram-headed creator god Khnum molding two children, one to be the physical body, and the other to be his ka (spirit version).  The story goes on to show the god Amun coming to her, the conception, the pregnancy, and the birth. The intent of the story is to justify Amenhotep III’s right to be revered as a god, just as the later story of Jesus used immaculate conception to justify his claim to be the Son of God.

In this segment of the wall, we see Queen Mutemwia (top right) sitting on the birth chair giving birth to her son s the deities Isis and Khnum rub her hands.

This birth scene would have been commissioned by Queen Mutemwia’s son, Amenhotep III, to support his divine claim to the throne of Egypt. Scholars estimate that his 37-year reign begin in 1386 BCE or 1388 BCE, which places the age of this scene as being more than 1,000 years before the temples of Edfu, Kom Ombo, and Philae (mentioned below) were constructed.

Interestingly, I had visited the Luxor Temple approximately 8 times without ever seeing this birth story.  Finally, I visited the temple for about the 9th time in 2019, and this was the first time a guide showed me this scene.  It’s not something that every tour of the Luxor Temple includes.  If you want to see the birth room, you may need to insist that your guide include it in the tour.

The Edfu temple honors Horus the Elder and his wife, Hathor.  Some of its walls feature scenes of Hathor nursing her infant, Horus the Younger.  Some of these scenes were damaged by early Christians during the Roman era, in an attempt to obliterate the earlier Pagan beliefs.

Near the entrance to the Edfu temple is a special room known as the mammisi, or “birth room”.  This is a small chapel located just outside and in front of the main pylons, and it celebrates the birth of “Horus, the Unifier of Two Lands”.  The mammisi features several images of Hathor playing musical instruments, including sistrum (rattle), frame drum, and lyre.

The Edfu temple that stands today is relatively young, but resides on the site of a much older shrine.  The structure that stands today was built after Alexander the Great conquered Egypt, leading to the era of Greek Pharaohs that ended with Cleopatra. The first stone of today’s temple was laid in 237 BCE, and it was consecrated in 142 BCE. This is one of the best preserved temples in Egypt due to having been buried for centuries under sand and river silt deposited by the Nile inundations.

For another of my blog posts about Edfu Temple, see Dance Like an Egyptian!

The temple at Kom Ombo, Egypt is unique because it honors two different gods – Sobek (with a crocodile head) and Horus the Elder (with a falcon head).  It’s a fascinating temple to visit, with many interesting images on its walls.

A unique segment of wall that is popular with many of the tourists who visit Kom Ombo is the scene showing two women using birthing chairs to give birth.  The wall to the right of them features images of surgical tools.

The throne-shaped object on the head of the lower woman is a nod to the goddess Isis and her role as a patron of fertility and motherhood.

One of the tour guides I’ve worked with, Abdul Aly, has proudly pointed out that ancient Egyptians have known about the benefits of delivering babies while sitting up in birthing chairs for at least 2,000 years. In contrast, modern Western medicine only started to embrace birthing chairs and the upright posture since about the 1980’s.

Like Edfu, Kom Ombo was built during the period of the Greek Pharaohs, on top of an older temple site dating from the New Kingdom.  Construction lasted from 180 BCE to 47 BCE.  In addition to the birthing chair scene, I was very fond of the on-site museum featuring crocodile mummies. Unfortunately, the Crocodile Museum at the temple does not allow visitors to take photos.  Another of my blog posts shows the Nilometer at this temple.

Philae Island at Aswan hosts the beautiful Nubian temple of Isis.  Construction began around 690 BCE, on a site that had hosted an older structure, with most of the temple that remains today being built during the reign of Nectanebo I, ranging from 380-362.  In the 1960’s, the island was flooded by the rising waters of the Nile caused by the Aswan High Dam, and Philae was one of the temples moved to a new site on higher ground funded by UNESCO.

There are several images of Isis nursing the baby Horus in this temple.  These resemble the madonna-style images of Hathor with Horus at Edfu. There is some overlap of the stories regarding Hathor (which were earlier) and Isis (who came later.)  Unfortunately, many of the images of Isis with Horus at Philae were vandalized during the Roman era by early Christians who were trying to obliterate the earlier Pagan religion.

I’ve featured highlights of how ancient Egypt honored motherhood by selecting several must-see images to watch for that are easy to find if taking a Nile cruise or a Luxor-to-Aswan tour or touring Saqqara near Cairo.  These are ones I’ve personally noticed so far on my travels to Egypt, but I’m sure there are many I have not yet found.  I’ll keep looking, and if I find more, I’ll add them to this blog post.

I encourage you, too, to keep looking on your own. You’re sure to discover more of these images in statues (in museums), tombs, and other temples.