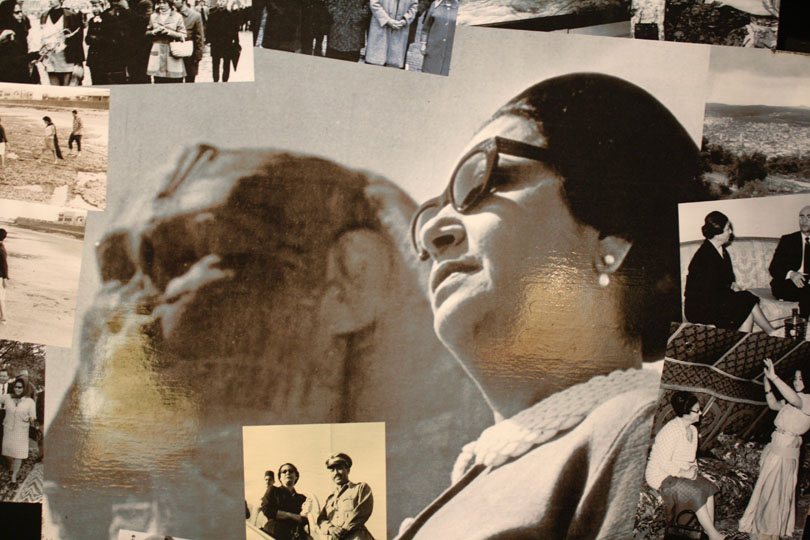 Tributes to the legendary singer Oum Kalthoum can be found throughout Cairo.  My three favorites, which I’ll highlight in this post, are:

Who Was Oum Kalthoum and Why Does She Matter?

Oum Kalthoum was a beloved singer who became known as “The Voice of Egypt”, “The Lady”, the “Star of the East”, and “The Fourth Pyramid”. When she died in 1975, over 4 million Egyptians lined the streets for her funeral cortege. Today, Oum Kalthoum’s music continues to be part of the soundtrack of modern Egyptian life, with radio and satellite television stations who play solely her music.

Oum Kalthoum continues to inspire listeners all over the world. Belly dancers around the world use her music for their performances. In 1978, three years after she passed, Bob Dylan told Playboy Magazine in an interview, “She’s dead now but not forgotten. She’s great. She really is. Really great.”  My local Egyptian restaurant in Coralville, Iowa  plays her music via satellite television for ambience. Many taxi drivers in Egypt tune their radios to stations that play her music. She was truly a great talent, and remains an important voice in world music.

The Oum Kalthoum Museum on Rhoda Island offers a glimpse into the life of this great artist.

As you enter the museum, it’s possible to purchase a permit for using a camera to take photos. However, flash is forbidden.  Photos must use available light. Fortunately, my 35mm camera and my cell phone camera both work very well with available light.

There is a 15-minute documentary video that visitors to the museum can watch to learn a bit about Oum Kalthoum, her music, and why she was so beloved by the Egyptian people.  I highly recommend taking the time to watch it, because it really helps put her life in perspective.

The first exhibit inside the entry showcases some of the dresses that Oum Kalthoum wore during her performances. 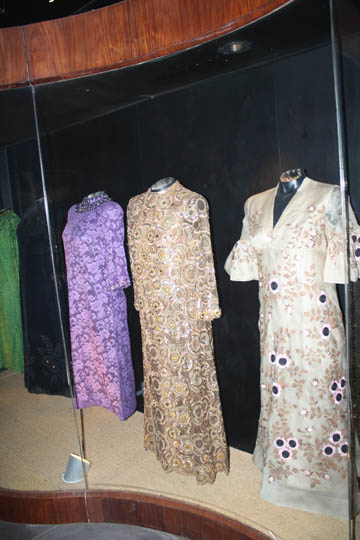 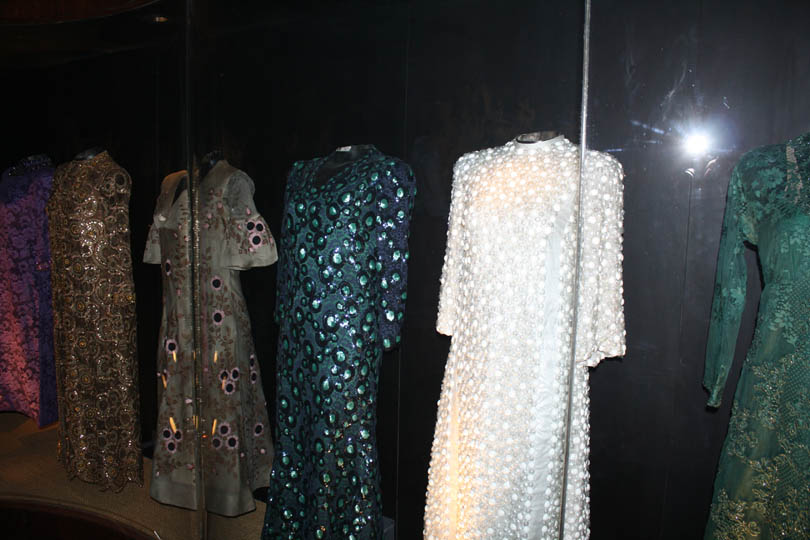 Several photo collages show scenes from Oum Kalthoum’s life.  Each one shows photos from certain eras. My favorite is the collage of her later years, which centers around a photo of Oum Kalthoum with Badia Masabni, a legendary nightclub owner. Oum Kalthoum is the one wearing the dark glasses. In her later years, she always wore dark glasses because a thyroid condition caused her to develop bulging eyes.  This condition can always cause dryness and sensitivity to light. 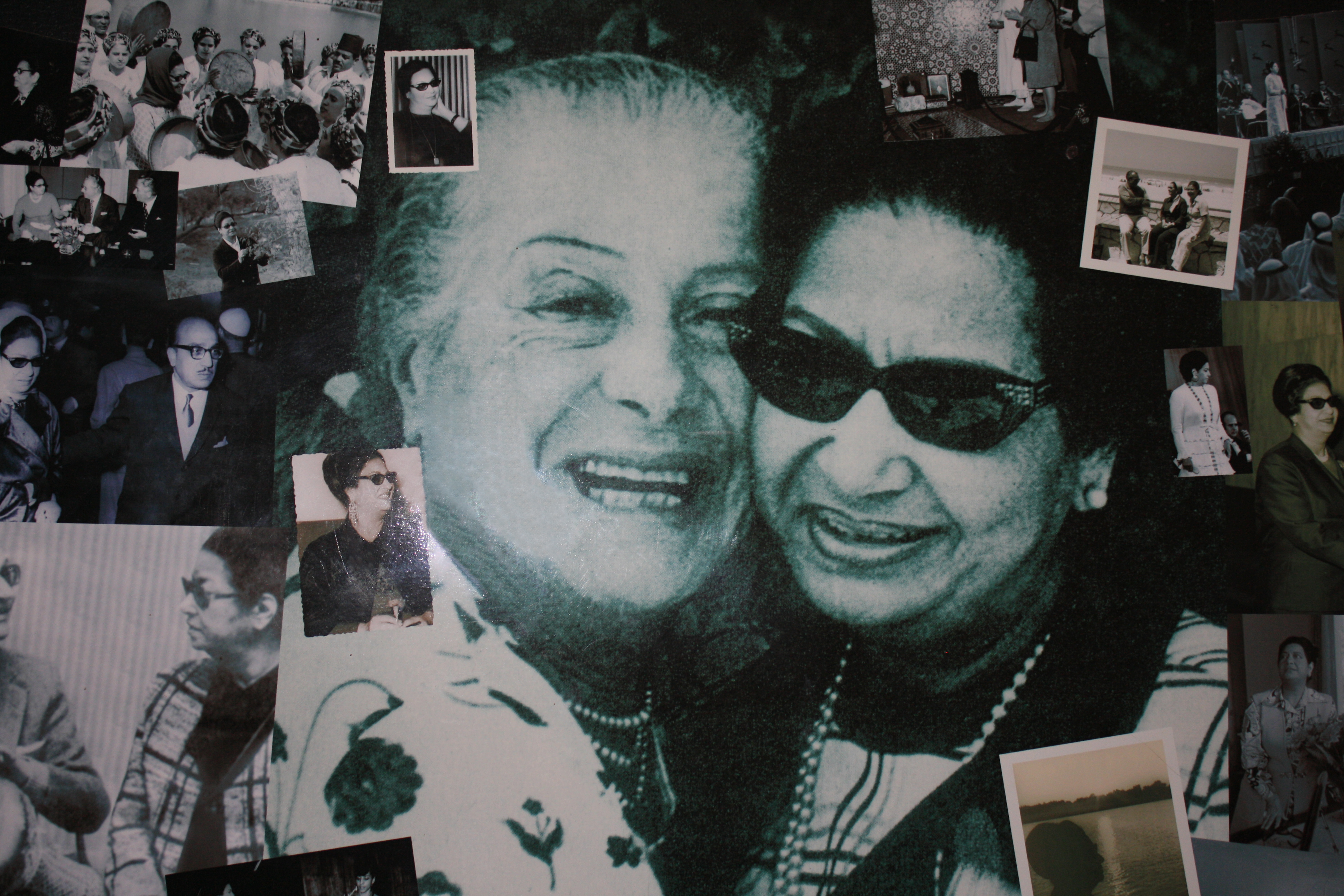 Several photos of Oum Kalthoum’s family life appear in the museum.  This one shows her with her brother. 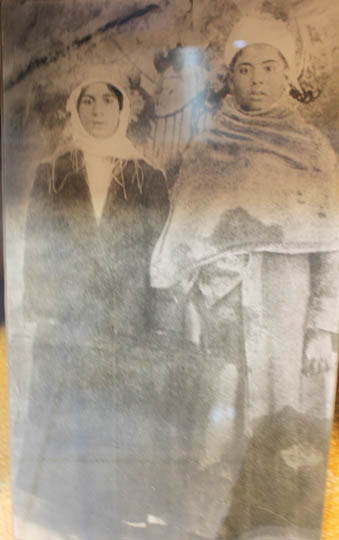 A variety of Oum Kalthoum’s personal possessions are on display.  For example, one display cabinet shows some of her shoes and handbags.

Several pairs of her diamond-studded glasses are displayed:

The museum also features original vinyl records, sheet music, awards that Oum Kalthoum received in her lifetime, and many more mementos of her life.  It’s an inspirational way to spend an hour or two, soaking up the nostalgia.

When I visit, I also enjoy walking around the grounds a bit.  Rhoda Island’s landscaping is very inviting, and the island offers beautiful views of the Nile River.

Just outside the museum, an abstract statue of Oum Kalthoum captures just enough of her iconic imagery to be recognizable. On her chest is the crescent-shaped diamond brooch whose photo appeared above, and in her hand she holds a handkerchief.  She always held a handkerchief when performing.

A second sculpture outside of the museum shows a musical staff with notes. I’m very fond of this one.

The museum lies within easy walking distance of the historic Nilometer, which is also worth visiting while there.

Just off of Moez Street, near Khan al-Khalili and Bab al-Futuh, the Oum Kalthoum Café offers an opportunity to sit for a while and enjoy the ambience of Cairo.

A statue of Oum Kalthoum posing with mushrooms greets you at the entrance of the cafe.  Inside, you can listen to her music continuously as you sip your tea and watch the the world go by.

Staying at the Oum Kalthoum Hotel

When Oum Kalthoum was alive, she lived in a villa along the Nile on Zamalek Island. After her death, her property was sold, the villa razed, and a hotel built on the land.  The beautiful hotel that stands there today is designed to honor her life’s work.

A statue of Oum Kalthoum greeted our tour bus as we approached the hotel.

Throughout the lobby, photos of Oum Kalthoum evoke memories of the singer as the sound system continuously plays her music.  I enjoy sitting in the lobby and simply listening.  The furniture consists of historic pieces from the mid 20th century, aligning with the period when Oum Kalthoum rose to fame.

The hallways of the first two floors feature furniture that once belonged to Oum Kalthoum, including mirrors in elaborate wood frames, elegant upholstered chairs, and tables.

When I stayed at the hotel in April 2018, I was fortunate to receive a room with a Nile view on the second floor, where I could walk past these mementos every day. Each room of the hotel, in addition to having a room number, also bears the name of one of her songs. I hope to be assigned the room Leylet Hob the next time I stay there!

A Nilometer (Nile-o-meter) is a structure in Egypt for measuring how high the annual flood of the river Nile rises each year. Before the 20th century, each year the Nile River would flood in the spring, spreading silt across the land it covered.  This inundation brought life to the region, because the silt it deposited enhanced the fertility of the soil.

In my travels to Egypt, I’ve seen 3 different Nilometers.  There are others that I have not (yet) had the opportunity to see, but perhaps I’ll get to see them on a future trip! I’ve seen reports that as of today there are fewer than 24 known Nilometers which have been found by archaeologists.

The Nilometer in Cairo is on Rhoda Island, a short walk from the Oum Kalthoum Museum. If you visit Cairo, it’s worth a trip to the island to visit both.

This Nilometer is one of the oldest structures in Egypt built after the Arab conquest. The original building at this site was erected in 751 CE, though archaeologists believe there was probably an older Nilometer at this site in Pharaonic times.   This initial structure was destroyed by a heavy flood in 861 CE, so the Abbasid Caliph al-Mutawakkil commissioned the current building to replace it.

Although the subterranean portion of the ancient building still stands, its dome was destroyed in 1825 by a nearby explosion.  A restoration was created, using a painting by Fredrik Ludvig Nordenas to provide guidance on what the original looked like.

The instrument for measuring the water’s height is an octagonal column divided into cubits located in the middle of the square stone-lined shaft. This photo shows the central shaft, as you look down from the street-level entrance:

Today, the tunnels leading from the Nilometer to the Nile are blocked off, and therefore water no longer comes in.

It is possible to descend a flight of stairs into the shaft. There are no handrails along the stairs, so it requires an adventurous spirit to do it! The interior is beautiful.

This Nilometer is located at the temple in Kom Ombo, Egypt, a town that lies between Luxor and Aswan. This is one of the temples that Nile cruises stop at, and it’s a very interesting one to tour because it’s dedicated to TWO gods, Horus the Elder and Sobek.

The Nilometer at Kom Ombo is a deep, cylindrical opening into the ground. At ground level, it doesn’t look like much, just a small circular wall.

It has a tunnel at the bottom that reaches outside the temple walls to allow the flood water to come in.

I have seen this Nilometer near Aswan from a boat on the river, as we floated past Elephantine Island where it resides. I haven’t yet set foot on the island to see its entrance from above. Archaeologists believe it is the oldest Nilometer in Egypt.

For most of ancient Egyptian history, Elephantine Island was the southern border of the Pharaonic kingdom. For that reason, the flood waters would reach this Nilometer first, before flowing downstream to the rest of the kingdom. It provided early insight into what growing conditions the country as a whole could expect.

This Nilometer at Elephantine Island was mentioned in the novel River God, by Wilbur Smith.

Ones I Haven’t Seen

Someday, I hope to see other Nilometers in Egypt. There’s one in the Nile delta at the ancient city Thmuis, which is near the modern city of El Mansoura. Archaeologists estimate it was build in the 3rd century BCE. I learned about this one from a National Geographic article about it.

The beautiful temple of Isis that resided on Philae Island had two Nilometers.  However, in the 1960’s, because of Aswan Dam constructions, about 1/3 of the temple’s buildings became flooded year round. The Philae temple was dismantled and moved to Agilkia Island as part of the UNESCO effort to save temples threatened by the completion of the Aswan High Dam. I don’t know yet whether Philae’s surface-level Nilometer structures were moved and reconstructed when the temple was moved. I have toured Philae about 5 times on my various trips to Egypt, and the guides didn’t point out any Nilometer remnants.  Even if they did, it would be only surface level, without the deep hole down into the ground.  I’ll ask about it the next time I go.

I’d like to thank Wael Mohamed Ali for assisting me with my questions about the Nilometers in the Aswan area.  I’ve appreciated Wael’s services on some of my visits to Upper Egypt as a tour guide and a translator.  He’s very knowledgeable, and a pleasure to do business with!